In 2022 the City of Little Falls will be redrawing their Ward boundaries in a process called redistricting. This process is necessary to adhere to the City Charter Section 1.02, "The city is hereby divided into three (3) wards as equal in population as practicable." Every decennial census, there is a count of population in our City, and in 2020, the results of the census showed that our populations in each ward were not as equal as practicable. Thus the City Council and staff approached exploring options to redraw the boundaries and balance the populations.

Important recommendations and requirements to follow when redraw ward boundaries:

Based on these requirements and the interest to keep the current wards as whole as possible, the task was to split 9,140 people into three wards, as close to 3,046 or 3,047 people as possible. The first major factor to consider was where to add population to Ward 3, which has historically been all of Little Falls, west of the Mississippi River. The population of Ward 3 in the 2020 census was 2,596, therefore around 450 people would need to be add to the area west of the Mississippi River as well as maintain a contiuous boundary. The City Council recommended area is from west part of the southeast, which is everything south of Broadway Avenue and west of 1st Street Southeast. This will add the area of Mississippi Flats, Linden Hill, and the neighborhood around the golf course. This new Ward 3 will have 3,064 residents.

The next approach was to split the north and south boundary of Wards 1 and 2. This was a little more difficult to determine based on the way the census counts population. The smallest areas of population counts are called census blocks, and they are in most circumstances a standard block (a block being an area surrounded by 4 streets). Census blocks work well so long as you don't have to split the line through a census block. The City Council recommended that the north/south boundary between Wards 1 and 2 be a single street or avenue as much as possible, and the street that fits this recommendation best is 4th Avenue Northeast, until Highway 10/371. 4th Avenue Northeast does not extend past the highway and if it would, it would then split the population in the Woodland Drive, Pondview and Timber Trail neighborhood. Thus it was looked at to include all of the area east of Highway 10/371 and south of 17th Ave Northeast as a part of ward 1. Using this north/south split and estimating the population in one census block along the Mississippi River that was split up between 4th Avenue Northeast, the population of Ward 1 will be 3,060 and the population of Ward 2 will be 3,016. This split keep each ward within 1% of the population of the others based on the 2020 census, and make for ward boundary map that meets the requirements and recommendations as we approach the next steps in the redistricting process.

The next step is hearing from residents, and we will have a comment section available on this page to submit public comments on this proposal (maps are also available). This comment period will be open from now until January 31, 2022, and then the Council will start the next step.

The next step will be utilitizing the recommendations, statutory and charter requirements to draft an ordinance that redefines the ward boundaries. This ordinance will be introduced in February, posted for at least 10 days prior to the next Council Meeting, and then it can be approved.

The final step will be submitting the new boundaries to the Secretary of State no later than March 29, 2022. Once the boundaries are received by the Secretary of State they will become official on August 9, 2022, the date of the State's first primary election. The City approved the polling places on December 20, 2021 for the three wards as Ward 1: Initiative Foundation, Ward 2: City Hall, and Ward 3: Bethel Lutheran Church. These are the same as the previous election, and if the recommended redistricting lines follow through they would more than likely continue to be the polling locations for the same wards. 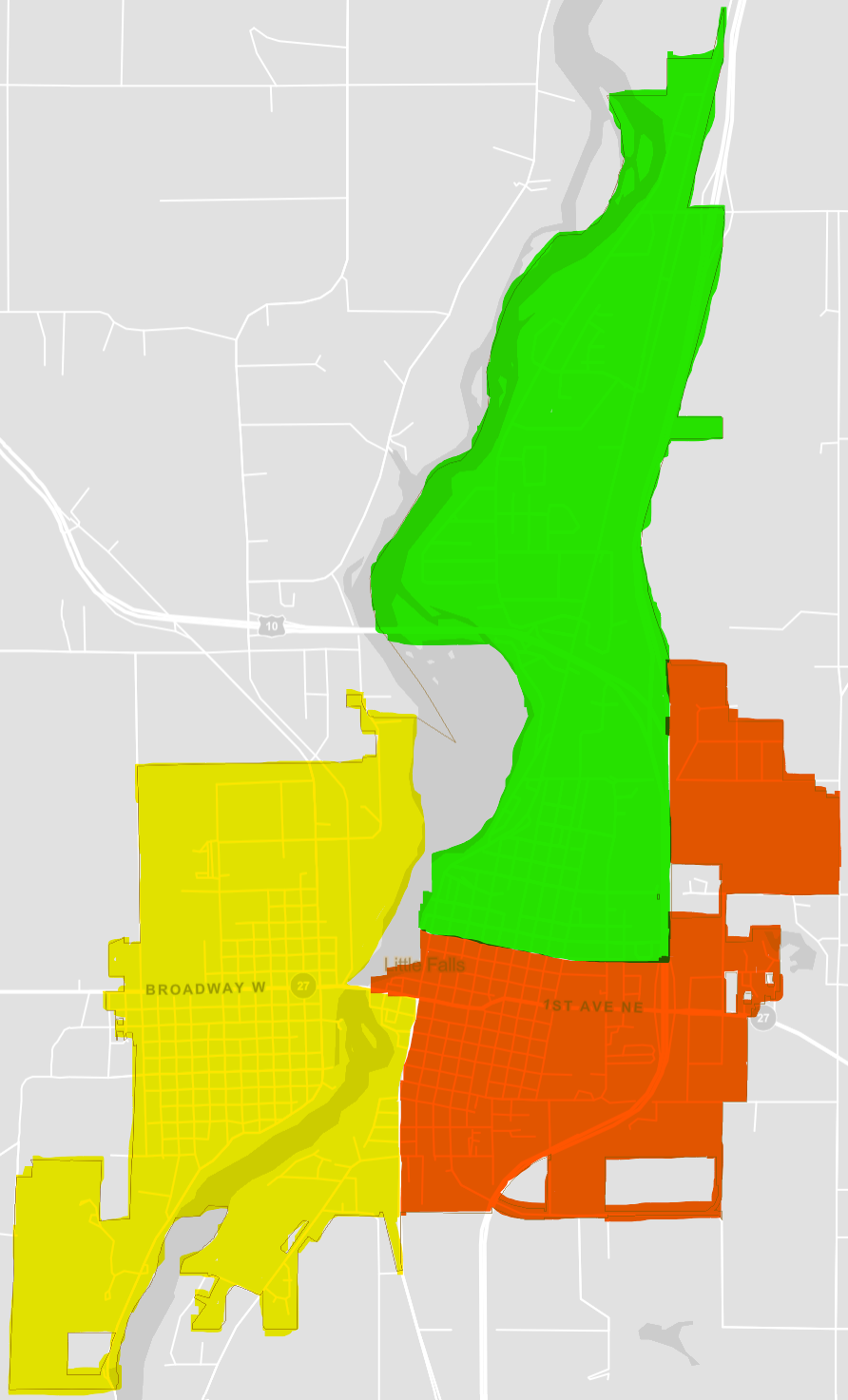 As a City of Little Falls resident, what can I do to share my input with the redistricting process?

So what happens to between March 2022 and the elections, both in August and November?

So what will happen after the 2022 election, will the wards be the same?

Who will I be voting for at the City?

What will happen at the Congressional District, State Legislature and the County if the City redistricts?

Is there anything else that I need to know about the 2022 City elections?