The beautiful falls on the Mississippi River attracted native inhabitants, explorers, traders and settlers. By the 1880's a surge in immigration, railroad expansion and industrial development created a boom. In 1889, Little Falls was incorporated as a city. It is the third oldest city in the state. Due to local brick-making industries, by 1890, large brick buildings replaced the former wooden storefronts. Within a two-year period the population had doubled, reaching 4,699.

Major industries that contributed to the growth of Little Falls were the Pine Tree Lumber Company, Hennepin Paper Company, and two large flour mills. Smaller industries included the Kiewel Brewery, a sash and door factory and a horseshoe factory. Carpenters, cigar manufacturers and blacksmiths were among the numerous tradesmen setting up shop. A major contributor to the economic growth of Little Falls was the surrounding diversified farming. Also evident was a vibrant social and religious community.

When the lumber and flour milling industries declined, others sprang up. Most notable was boat building, which began with the Larson Boat Company, in the 1920's. Boat building was the driving force in Little Falls' industry for nearly 100 years. The City of Little Falls continues to grow with new and innovative, startup companies. Little Falls is home to Hoonuit, an international software company; Lakemaster, a lake mapping software company; AirBorn Inc, a specialty connector company; Wabash National, a leading refrigerated trailer company; Falls Fabricating, a metal fabricating facility; DJ Products, a power trailer moving manufacturer; Mielke Oil, a lubricant and fuel distributor; and Little Falls Machine, a nationally known plow manufacturer.  The growth of Little Falls continues, thanks to the early entrepreneurs whose vision gave it impetus. 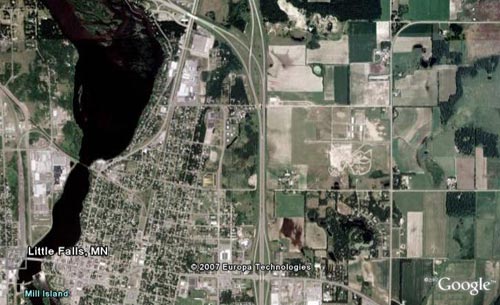 Our teachers are highly educated and highly trained, nearly half of which have masters degrees and bring an average of 17 years in education to the classroom. Our district is larger then 75% of school districts in the state and offers "big District" programs and opportunities for students through a personalized community environment. Please view the complete list of education facilities below. For information on Little Falls Public Schools visit www.lfalls.k12.mn.us. For information on Mary of Lourdes Schools visit www.molschool.org.